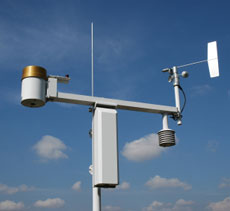 Sophisticated instruments help predict the weather. Computers enhance satellite photos and help construct models of weather patterns. Whereas once people looked to animal behavior and signs in nature to predict the weather, they now look to electronic equipment.

Meteorologists use weather stations (picture at left) to gather information such as wind speed, humidity and rainfall amounts.

Every year, thousands of forest fires and hundreds of deaths are caused by a powerful natural form of electricity: Lightning.

Researchers break down the components related to lightning simply: the bottom of thunderclouds hold mostly negative charges (-). The top of the storm is charged positively (+). Opposites attract between the positive and negative charges, and paths are created–paths which spark flashes of lightning. Lightning moving through the air creates a sound wave that we hear as thunder.

Where does lightning go? Electricity seeks a path to the ground. It often reaches the ground by traveling paths through tall structures, such as trees, buildings, or people out playing a round of golf.

Electricity in the form of lightning is very dangerous. If you are outside during the formation of a thunderstorm, seek shelter in a building.

• Don’t think of trees as being safe havens. Lightning seeks out tall structures or objects to reach the ground.

• Don’t think that just because you don’t hear thunder, there won’t be lightning. Seek shelter. Lightning travels at the speed of light. You don’t.

• Always respect the most powerful force of electricity on earth: lightning. 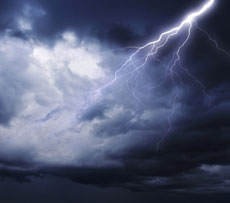 A scientist viewing satellite pictures of storm clouds in Earth’s atmosphere once caught a glance of something peculiar. Upon closer investigation, he watched as strokes of lightning spurted up ABOVE the thunderclouds.

These flashes, which hadn’t been noticed before, were named “red sprites” (“sprite” from literature, meaning elf-like) and “blue jets.” The red sprite flashes were plotted to flare on the average 30 to 50 miles above the top thundercloud layer.

The blue jets were cone-shaped and flared on average 10 to 30 miles above the top cloud layer. Satellite technology brought science to a new understanding about the behavior of lightning flashes.