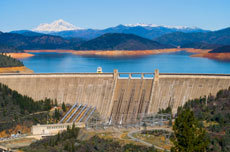 Electricity is generated by electric utilities in several ways:

• By utilizing coal, natural gas or oil as fuel to heat water

In most power company plants, water and steam play a major part of the electricity-making process. Water is pulled from a source such as a river, then used to make steam to turn a turbine to create electricity. It is then cooled and later reused or pumped back to its source.

Hydroelectric plants use water that has been impounded behind a dam. Water is directed through specially-built tubes to flow against the blades of turbines. The whirring turbine shafts are connected to wire coils in generators.

The wire coils spin inside generators that contain magnets or electromagnets. Spinning wires in a heavily magnetic field in a generator induce an electric current of about 20,000 volts. This electric current flows from the generator to a power plant transformer where the current is enhanced. Electricity loses some of its strength as it travels long distances so it must be helped along. Transformers can either increase (step up) power, or decrease (step down) power.

Transmission lines carry approximately 700,000 volts of electricity from the power plant for distribution. Next stop – a power company substation. Here electricity is stepped down to about 10,000 to 12,000 volts. Electricity then travels on distribution lines atop wooden or concrete power poles, or is run through special conduits underground.

Reaching a building, the wires carrying electricity travel through another transformer, again to step down the voltage, this time to 120 or 240 volts. A cable containing three wires (two live wires and a neutral ground wire) carry the power to the building through a meter box. Meter boxes monitor amount of  electricity consumed.

Wires inside the building carry electricity to outlets and sockets, ready for the flip of a switch to be put to work. Consider all outlets and sockets “hot”. Turn off wall switches when changing light bulbs and turn off the power at the power panel when performing repairs on ceiling fans or outlets.

Fossil fuels, coal, natural gas or oil, are burned to heat water to make steam. This steam is directed against the blades of turbines and the process of making electricity is identical to the hydro example above. A word about the fossil fuel process: 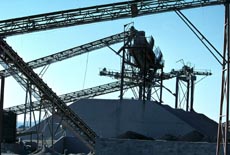 • Concerned over particles that might effect our air quality, power plants have installed electrostatic precipitators at their facilities. These precipitators “clean” the smoke leftover from the fossil fuel burning process by using static electricity. The static electricity attracts the tiny carbon particles and forces them into a catch pan. The catch pan is emptied periodically into a special pond of water that might include waste water from the plant. The particles actually work like a charcoal filter and help clean the water in the pond.

• The superheated steam that pushes the turbine blades? It’s directed into hollow cooling towers. These towers provide a place for the water to condense by transferring the heat in the cooling water into the air. Water is collected in a catch basin and reused in the plant.

• When power plants are located near rivers or oceans, the cooling water is pumped back in. The warm water is harmless to the environment and bolsters the renewability of the resource. In pictures of power plants, you might see cooling towers. What you see rising above the towers is not smoke, but harmless water vapor. 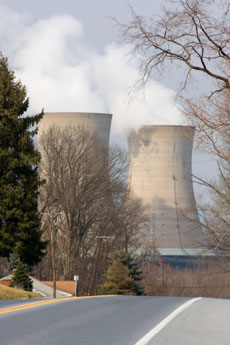 Nuclear power plants use the power of the uranium 235 atom for nuclear energy. Uranium ore is mined and processed for use in this technology. The nuclear power facilities in this country are secure and completely safe to the environment. Reactors used in the fission process are housed in reinforced containment structures.

The intense energy released from all this splitting (or fission) is slowed down and controlled as necessary by rods containing boron that are placed between the fuel rods. Boron absorbs some of the splitting neutrons and slow down the process. Purified water also serves to control the reaction.

The end result of the fission is the creation of tremendous amounts of heat that’s used to turn water into steam. The steam is used to power turbine blades and generators. Making electricity from this point is virtually the same as in hydroelectric or fossil fuel plants.

The water that turns to steam and that powers the generators never touches radioactive materials. It is cooled in cooling towers, pumped back for reuse, or is returned harmlessly into the environment through ponds, rivers or oceans.

Nuclear power uses less natural resources than some other forms of electrical generation and is useful in countries that don’t have a lot of fossil fuel reserves. 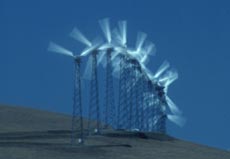 Alternative sources of energy include solar energy and wind.

Solar energy is produced by the sun heating specially designed cells that heat coils. The coils then produce heat. The heat can then be converted to electricity in a number of ways.

Giant windmills in the desert Southwest convert wind to energy by letting the wind turn massive blades that turn generators to produce electricity.